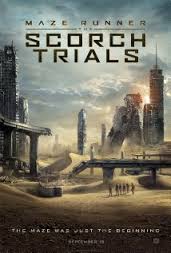 The Maze was just the beginning…obviously otherwise there would be no point in having a trilogy. Based on the popular YA novels, The Scorch Trials is the second in the Maze Runner series. I really enjoyed the first one, but will this sequel run out of steam?

Picking up where the last film left off, Thomas and co have escaped the Maze and believe their troubles are behind them. However they realise that their enemy W.C.K.D are still active, leaving the group to make an escape to the deserted lands outside.

One of The Scorch Trials best attributes is its high octaine action sequences, and like the first film there are some very tense moments. While the first film was being compared a lot to movies like The Hunger Games, The Scorch Trials seems inspired by The Walking Dead and 28 Days Later when our protagonists come across some unwelcoming sights in the desert. There are moment when the pace dips a bit but then another action set piece comes along to keep things moving.

Once again Dylan O’Brien shines as Thomas, and he’s aptly supported by Ki Hong Lee (Minho) and Thomas Brodie-Sangster (Newt) as Thomas’ loyal friends. However Theresa (Kaya Scodelario) still feels underdeveloped and gets more annoying in this film. New girl Brenda (Rosa Salazar) comes across as more interesting and gets involved in more of the action than Theresa does. What I also like about the actors is that they really look like they’re running for their lives when they’re sprinting from danger, unlike most actors in these kinds of movies.

The main big bad W.C.K.D are a bit underwhelming as this all-powerful organisation cliché. The film tries to give them a it’s-for-the-greater-good motive to make them seem a bit more three-dimensional but I really didn’t care. The Scorch Trials is also not quite as good as it’s predecessor but sets up well for it’s final movie (another point in this series favour is that it’s not trying to split the last book into two movies-thank god!).

The Hunger Games won’t be losing it’s crown as the best of YA film adaptations but the Maze Runner series still hold some great action and adventure as well as protagonists to root for. Plus any film that uses Patsy Cline’s Walking After Midnight as an important plot device gets my vote.

Rating 3.5/5 – an action packed and exciting way to start the autumn