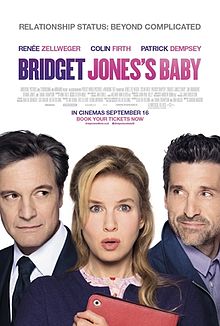 Bridget (Zellweger) is 43 and despite splitting with Mark Darcy (Colin Firth) since the last movie she is celebrating life with a successful career as a television producer and spending time with her new friend Miranda (Sarah Solemani). However life gets complictaed when she falls pregnant and the father is either old flame Mark or dashing American Jack (Patrick Dempsey).

After the disapointing Bridget Jones: The Edge of Reason finally we get a sequel that is a worthy successor to 2002’s Bridget Jones’s Diary and a great rom-com in it’s own right. Bringing back Bridget Jones’s Diary director Sharon Maguire was a smart move as is signing on Emma Thompson to co-write the screenplay. Together not only is the film funny but it also remembers not to treat Bridget as an incompentent idiot, fawning about over blokes. Instead we get a more grown up Bridget whose love life is not the be all and end all of her life, although she’s still a flawed woman who occassionally screws up (as many of us do). It also makes you appreciate Zellweger’s performance and the warmth she puts into portraying Bridget.

Although I was disapointed that Hugh Grant’s caddish Daniel Cleaver did not return, it would have been ridiculous if Bridget went back there with Daniel again. Plus the little mentions we do get about Daniel are hilarious. Stepping into the love triangle instead is Dempsey’s Jack, whose makes a worthy play for Bridget’s heart and refreshingly is a decent guy instead of another Daniel Cleaver in waiting. The best newcomers through are Solemani’s anchorwoman Miranda who has some of the best scenes and Emma Thompson’s Dr. Rawlings-Bridget’s gynacologist- who shows it pays to give yourself the best lines in the film you are co-writing.

For me this movie isn’t quite on par with Bridget Jones’s Diary and it’s a shame the film becomes a bit more conventional at the end. But overall it’s hilarious and makes you wish the film industry was producing more romantic comedies. 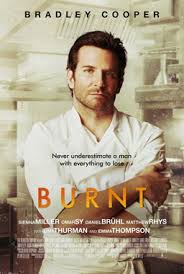 I’m not really a fan of sweary, obnoxious cooks, give me Mary Berry and The Great British Bake Off any day! However this comedy-drama tries to entice the fans of Bradley Cooper into watching this film set in the world of a down on his luck chef. But is the result appetising enough?

Adam (Bradley Cooper) was an up and coming chef whose arrogance and drug use brought him down to Earth with a bump. Having wrecked his and other people careers, he’s looking to get his third Michelin star and a chance at redeeming himself.

Despite including my two favourite things – Bradley Cooper and food – I wasn’t too interested in seeing this movie. But stuck with nothing to watch- and wasn’t going to be seeing Spectre for a few more days, I settled myself in to watch Burnt with low expectations. To my surprise I actually enjoyed Burnt. Its nothing original but it’s constantly funny, the performances are good and there are some darker moments I wasn’t expecting. Yes, Cooper is main part of the appeal but not just for his looks. Adam can be quite an unlikelable, arrogant character who is self-destructive and shouts at people. Cooper manages to make Adam watchable and interesting enough to follow on his journey despite his many flaws. It probably isn’t til the end of the movie that Adam becomes more likeable and that’s due to Cooper’s charm. The film also doesn’t try to make out that Adam is just misunderstood. He behaved appallingly in the past and it’s no surprised people are angry at him. Even the supposed antagonists of the film have good reasons to be mad at Adam and the film doesn’t pretend he didn’t bring it all on himself.

The supporting cast is good, from Emma Thompsons small scenes as Adam’s Doctor and Daniel Bruhl as the matradee Tony. I also liked Sienna Miller’s sous chef/love interest Helene. In the past I haven’t though much about Sienna Miller as an actress either way, but in this and American Sniper she seems to be able to create more memorable and sympathetic characters. Working with Bradley Cooper must be agreeing with her. Or maybe she’s now getting parts that have more to them then being the hot girlfriend.

A word of warning though make sure you bring some snacks with you cause the food on-screen looks delicious and it will make you hungry.

Rating 3.5/5 – sizzling and hot, but enough about Bradley Cooper, the film is good too

You would imagine that someone as big and powerful as Walt Disney would just have to click his fingers and get whatever film rights he wanted. However this oscar-bait movie shows that not everyone is susceptible to the charms of Disney.

Its 1961 and Walt Disney (Tom Hanks) has been trying  20 years to secure the film rights to P.L Travers'(Emma Thompson) popular children’s story Mary Poppins. Eventually Travers agrees to go to Hollywood but only due to her financial struggles and insistence of her agent. As Walt and his team try to convince Travers to give over the rights to her story, flashbacks of the author’s childhood showed what shaped herself and her beloved novel.

Looking at this cast you can’t fault their performances. Thompson-as always-is brilliant as the author whose blunt and harsh demeanour is hiding an emotional connection to her characters that go beyond an author merely being possessive of her work. I loved her interactions with the composers and  scriptwriter (wonderfully played by B.J Novak, Jason Schwartzman and Bradley Whitford), fighting them at every stage and making impossible demands that she knows are unreasonable. While her interaction with her chauffeur Ralph (Paul Giamatti) also help  showed a softer side to Travers.

At times it does feel like the same old ‘stuffy, uptight Brit meets the relaxed American’s routine. However the experience of Hanks and Thompson makes sure that these characters don’t stray too far into that tired old story.

I could have done without so many flashbacks to Traver’s family. I know it’s important back story for what inspired the book, but I think they could have been cut down as I felt like they were dragging me away from the main plot line and pulling me out of the story. I’m also not too sure how accurate some of Traver’s interactions with Walt were or how she felt about the finished product.

What this film does establish though is bringing a deeper meaning to the characters in Traver’s story and makes you want to re-watch Mary Poppins with a newer understanding of what Traver’s characters meant to her.

Rating 3.5/5-perhaps too whimsical for Travers’ taste but this film has bundles of charm to get you swept along

There are many films trying to carry on where Twilight left off and create box office gold by trying to  find the next young adult fiction series that can be adapted to the big screen. Beautiful Creatures was an attempt earlier this year to capture that lucrative market.

Ethan (Alden Ehrenreich) is an American teenage boy who is desperate to leave his small town home. Then he meets new girl Lena (Alice Englert) who doesn’t fit in with the town’s religious community due to rumours surrounding her weird family and strange things that tend to happen around Lena. He pursues a romance with Lena only to find out that Lena’s life is quite complicated not least by the fact that she is a caster (a witch) and the females in her family are affected by a curse which means her soul will be either claimed by the light or the dark on her 16th birthday.

Beautiful Creatures didn’t exactly set the box office alight when it was released so its unlikely that any further films based on the book series will be coming to the cinema. It’s not hard to see why people didn’t warm to it. The film is way too long. Although it starts well enough the film soon starts to drag and its difficult to care about whether Lena is claimed for the light or the dark. The supporting characters don’t seem to know how they should deal with the source material, Emma Thompson goes big, hamming it up greatly while Jeremy Irons phones in his performance clearly thinking of the money dear boy.

However what the film lacks in some areas it makes up for in its engaging leads.  Ehrenreich and Englert shine as the loved-up teens. The early scenes where the characters are getting to know each other are the best scenes, establishing both of their personalities and its easy to see why they fall for each other. It’s just a shame their romance gets dragged down with the plot about the curse.

It may not be the best young adult fiction adaptation but for viewers who enjoy romantic films and set their expectations low you may be charmed by the young actors of Beautiful Creatures.

Rating 2.5/5-Easy watching as long as you don’t expect too much