So last weekend I was at the Empire Live weekend at the O2 where I got a chance to meet the star of Swiss Army Man Daniel Radcliffe. 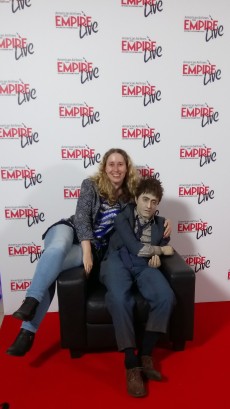 OK so I didn’t get to meet the man himself but I did see a special double screening of the actor’s two new films with an introduction in person by Daniel Radcliffe himself. I’m pleased to report he was as self deprecating and funny as he comes across in interviews. But what of the films themselves?

Hank (Paul Dano) is alone on an island and contemplating suicide when a man’s corpse (Daniel Radcliffe) is washed ashore. As he has been isolated for so long Hank develops a weird friendship with the corpse-Manny-who slowly seems to be developing strange powers and may be coming back to life. The two then begin a strange jounrey back to civilisation.

Swiss Army Man is a weird film but as it says itself maybe its OK to be weird and not perfect and to celebrate the ugly things about yourself.

To say that Daniel Radcliffe’s best role post Harry Potter is as a corpse may sound like an insult but he’s truly great as the dead man who seems to be coming back to life. As Hank’s optimism grows so Manny becomes more alive and displays new powers with Dano and Radcliffe make for a hilariously great partnership.

Swiss Army Man is such a strange creature that it manages to make a film about a farting corpse into a heartwarming, life affirming movie. It’s also very funny. But I can also imagine this film will prove to be devisive among audiences. Some will love it and others will hate it. At the Empire Live screening we were given a free bottle of Heineken and it’s probably helped throw me into a film as odd as this.

Rating 4/5 -it’s the best film about a suicidal man and a farting corpse you’ll see all year, high praise indeed!

FBI Agent Nate Foster (Daniel Radcliffe) goes undercover to investigate white-supremacist groups. However Foster is not used to working as a field agent, can he handle the difficulties of maintaining his cover and discovering connections to a posisble bomb plot?

As an FBI agent going undovercover as a Neo Nazi, this does not seem like a natural fit for Radcliffe but then real life FBI agent Michael German (who is the inspiration for this film)  didn’t seem like an obvious choice to go undercover either. In his post Potter career Radcliffe has admirably aimed to go into as many varied roles as possible, which while commendable it has not always completely convinced. However Imperium and Swiss Army Man sees the actor finally come into his own and seem more comfortable in these new roles.

Imperium is a more conventional film than Swiss Army Man and makes a good drama thriller. It won’t hold many surprises for its audience and has over familiar plot beats but is also engaging throughout. The director Daniel Ragussis creates many tense scenes like a rally that discends into violence. The cast is good with Radcliffe convincing in the lead role while Toni Collette also manages to sink her teeth into the role of his superior in the FBI.

Imperium may appeal more to the average cinema goer and won’t be as divisive as Swiss Army Man but it also won’t be quite as memorable.

Technology and society’s relationship with it has been the focus over many films over the years. In Spike Jonze’s film we see how technological advances leads to an unconventional romance.

In a futuristic Los Angeles Theodore (Joaquin Phoenix) is lonely and going through a stressful divorce. When he purchases an A.I operating system called Samantha (voiced by Scarlett Johansson) the two begins to form an unexpecting relationship.

The world inahbited in Her is very similar to ours  but where technology is five minutes into the future. I could believe a lot of the technology we see here being made in the future, if not already being developed. The main focus is on humans relationship with technology, while you would expect all this new tech to be isolating (and some early scenes show how this could be the case) Theodore’s relationship with Samantha opens him up to the world in a way he never did before.

At first I thought that Theodore would come across as a bit creepy and be unable to cope with a real woman with her own thoughts and that’s why he’s in a relationship with an OS. Luckily the film is more complex than that and while Samantha may be an A.I she also comes across as real and complicated just like everyone else.

Phoenix is great in the lead-which is good as he is in practically every scene. And he’s especially good when you think about the fact he is reacting to someone who wouldn’t have been present in the room with him, yet you believe in his bond with Samantha. As someone who is only present through her voice Johansaan is a dominating force and manages not to come across as robotic but still have an otherworldly feeling to her character that marks her out as not human. I also liked Amy Adam and Rooney Mara in supporting roles that add differing views on the central relationship.

The only thing I wasn’t sure of was the ending, not that it was a bad ending but the whole third act seemed a bit random. Hopefully if I watched it again maybe the climax will make more sense.

I’m not overly keen on home invasion movies. Why would I want to see a film about people’s houses being burgled? (Then again, why do I watch horror movies where people are getting murdered? So many questions for therapy!) Don’t Breathe director Fede Alvarez promises a fresh twist on the tired format.

Rocky (Jane Levy), Alex (Dylan Minnette) and Money (Daniel Zovatto) are three friends who burglarize homes but find they’ve met their match when they break into the house of a blind man (Stephen Lang) who won’t take their tresspassing lying down.

Don’t Breathe introduces us to  three thieves with varying degrees of likeability and sympathy and a deceptively vulnerable antogonist, forcing the audience to question who we should be rooting for and where our sympathies should lie. It would have been more interesting if the film had kept some ambiguity with this but it soon becomes obvious who is the true villian of the piece is, even if other characters can not whiter than white.

For the first two thirds of the movie the direction is tight and the limited set is contained to one house bringing a claustraphobic atmosphere that is well maintained. Tension is derived from the littlest thing, where a squeak of a shoe or an inhale of breathe can be a deadly error. Alvarez gives us great moments such as a chase in the basment in total blackout. The small cast make the most of their moments with Minnette as the sensible member of the group Alex standing out performance wise and Lang making for an intimadating antagonist.

It’s a shame the last third becomes silly and one scene verges on becoming something much nastier which left a sour note behind. It prevents the movie from being the top notch thriller that it wants to be however it doesn’t undo the previous good work.

(As an aside note I couldn’t help thinking as I was watching Don’t Breathe that this would make for an interesting and contrasting film to the Audrey Hepburn movie Wait Until Dark.)

We’ve previously had Bad Santa, Bad Grandpa, Bad Neighbours, now prepare for the Bad Moms. But can the antics of these bad moms provide good entertainment?

Based on the trailer I didn’t have high hopes for this latest crude comedy. However I’m pleased to say that it was a movie that consistently had me chuckling away in my seat. If you’ve seen films like Bad Neighbours or Mike and Dave Need Wedding Dates then you can imagine the sort of humour involved. While Bad Moms does involve many raunchy jokes it also takes some amusing swipes at the unrealistic expectations to be the perfect mother.

Even if, like me, you don’t have kids you’ll still find yourself relating and sympathising with the bad moms. While Kunis looks a bit too glamouress to convincely portray a stressed out mother she does make up for it by gamely throwing herself into the comedy. All the moms are good but the most memorable moments come from Hahn’s outrageous single mom and Christina Applegate’s mean mom.

Having already made over 100 million at the box office it wouldn’t surprise me if we end up with a Bad Moms 2 and this time around I’ll be looking forward to it.

Based on true events, 13 Hours tells the story of six security team members who have to defend the American diplomatic compound in Benghazi, Libya on September 11 2012.

As you can imagine with Michael Bay as the director, 13 Hours is about as subtle as a sledgehammer. The script is not up to much and the characters are indistinguishable from each other, making it hard to know who is getting shot at and who is at death’s door. But you have to hand it to Bay, when he’s up to it he can make some engaging action scenes, as we witness a ground level attack on the compound you can’t help but get drawn in, even if the editing sometimes means you can’t work out who you’re watching.

While at times the film can feel like a straight faced version of Team America (“Fuck Yeah!”), it’s not as bad as I feared it could have been. I’m not sure of the historical accuracy of the movie but if viewed as purely an action thriller it can be gripping and exciting.