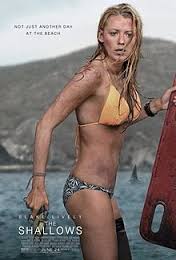 If The Shallows had been a Syfy movie it would surely have been called Blake Lively vs Mega Shark. But can The Shallows avoid it’s potentially B-movie trappings?

Trying to cope after her mother’s death, Nancy (Blake Lively) travels to a secluded beach her mother used to visit before Nancy was born. After an idylic start surfing, the trip takes a dangerous turn when Nancy is attacked by a great white shark. Alone, injured and afraid Nancy must use all her wits and skills to survive.

At the start we have an idyllic beach and a gorgeous girl with lingering shot of the luxurious scenery and Lively in a bikini. But if you thought this film was just a way to oggle Lively you’d be wrong. After the first shark attack the beach changes to a sea full of blood and danger and we are forced to watch Nancy as she tries to heal her wounds in close up detail. Warning this is not for the squeamish.

Lively is more known for Gossip Girl and being married to Ryan Reynolds than for her acting, meaning that her stellar work in films like The Age of Adaline and The Town is sometimes overlooked. But hopefully she’ll start getting more recognition from The Shallows. With a very small cast, Lively is mostly on screen alone (along with an injured Seagull who Nancy excellently names Steven Seagull) and she commands attention as the troubled but resourceful Nancy. It’s not easy to have an entire film on an actress’s shoulders but she elevates the movie from being a cheesy shark attack movie along with tight direction and inventive script. I also liked

For the majority of it’s running time The Shallows maintains a tension-filled survival thriller with some well times scare jumps and unerving dread. However in the last 10-15 minutes the movie starts to get a bit silly and start looking more like a SyFy movie.

Rating 3.5/5 – it’s daft ending aside  The Shallow is an effective survival thriller with a great lead turn by Lively

One response to “The Shallows”