Game of Thrones Season 6 Episode 10: The Winds of Winter 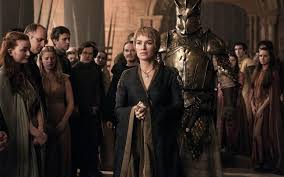 After six seasons Winter is finally here, and everything is changing in Westeros. It’s hard to know where to begin.

It’s the day of Loras Tyrell and Cersei’s trials, and Loras confesses to everything in order to get a ‘light’ sentance of giving up his wealth and his title, never allowing to marry and having to be branded by the Sparrows. As Margery watches on horrified she notices that Cersei is nowhere to be seen. Indeed while everyone else is at the Sept, Cersei is setting her plans in motion, first organising for Pycelle to be killed by Qyburn’s little ‘birds’. Quite horrifying seeing all the chidlren stabbing the old man. But thats not all she has planned.  As the Mountian prevents Tommen leaving the Red Keep you just know something really bad is going to happen and it’s not long until we relaise what that is. As Lancel looks for Cersei, he realises too late that there’s wildfire under the Sept. Margery, fearing the worst from Cersei’s late arrival tries to get everyone to leave but the High Sparrow doesn’t listen to her. As the Wildfire goes off, it destroys the Sept killing the High Sparrows, Margery (NOOOOOOOOOOO!), Loras, their father, Lancel as well as the sparrows and many inocent people.

There was speculation that Cersei had discovered the wildfire and such a weapon was never going to end well in Cersei’s hands. However she doesn’t forsee what seeing such an event will do to Tommen and in his grief he throws himself out of his window. I didn’t think Tommen would survive the season but I’m gutted Margery is dead (or is she, we didn’t see her die-but I expect she is dead). She was one of my favourite characters and I loved her relationship with her grandmother. I couldn’t even enjoy the death of the High Sparrow, and everyone knows how much I’ve been waiting for him to kick the bucket. As Jamie returns back and sees the destruction he’s just in time to see Cersei  taking the throne and so Westeros has a new Queen. God help everyone!

In Winterfell Davos finally confront Melsiandre about the fate of Shireen and makes her confess to Jon what she did. While Davos (understandably) wants her executed Jon exils her south. I think this is a smart move by Jon, as you never know when she might come in handy although surely Davos is going to have to kill her eventually in revenge for Shireen?

Meanwhile Jon and Sansa discuss the events of the battle and Jon tells Sansa that her actions saved everyone but urges her that they have to be honest with each other if they are goign to survive. He wants her to lead Winterfell as Lady Stark but Sansa tells Jon he’s just as much a Stark as she is. I love that they are trying to work together and not be involved in a power struggle. Littlefinger tries to push Sansa towards being a leader and also tells her how he dreams of being the King on the Iron Throne and wants Sansa by his side. Really Littlefinger? After all you’ve done you think she’s going to be ok with that? Naturally Sansa is not impressed though Littlefinger tells her he is still loyal to House Stark. I’m not surprised Sansa is dubious considering his history. Later Jon and Sans have a banquet with the Wildings, the Kinghts of the Vale and the Houses of the North. Jon tries to tell them that there is still a war to fight but many of the Houses are unsure whether to follow. That is until Lady Lyanna Mormont speaks up for House Stark. It was great seeing the Lords shamed by a little girl, and her words are so powerful it causes everyone to pledge loyalty to Jon, naming him the White Wolf and King of the North. It was a lovely moment seeing Jon welcomed by the other Houses considering his previous treatment of them because of his heritage. But Littlefinger is going to be a problem I can tell.

For a bit of light relief we see Sam, Gilly and baby Sam arrive at Oldtown and report at the Citdel. One of the men there mentions how they still have Mormont as the Commander of the Night Watchin their records-oh how out of date their records are! They also release White ravens to signify winter is here, news of which reaches Sansa and as she tells Jon the news a rarely seen smile spreads across his face. As he says to Sansa their dad always said it was coming! About time!

Meanwhile Walder Frey celebrates the recapture of Riverrun by holding a banquet. After everyone leaves a serving girl brings him a pie and he wonders where his sons are. As the girl repeates that his sons are here it took me a moment to realise what she meant. I think I actually gasped. That she reveals what I suspected, that Frey’s sons have been murdered and baked into his pie. She then removes her face to reveal herself to be Arya! I did not see that coming at all! I thought it would take her forever to get back. She then murders Frey. I’m glad that after all this rubbish in the House of Black and White we finally get Arya back doing what she does best-getting revenge! And what glorious revenge it is.

Bran also gets another vision back to the Tower where he saw his father searching for his sister Lyanna after the death of the Mad King. As she lays dying she gives Ned her son to look after as his basterd-the scene then cuts to Jon! One of the biggest mysteries around the series-who is Jon Snow’s mother-has now been revealed! I had heard this theory a while ago that Ned was not his father and actually belonged to his sister.  I’m not sure if it is confirmed who his father is yet though so will be interesting to see what the show reveals to us.

After the deaths of her family members Olenna Tyrell goes to Dorne looking for revenge. She also insults the Sand Snakes and puts each one in her place. It was almost worth having the Sand Snakes back for that alone. Ellaria Martell then offers an alliance and a figure emerges from the shadows-it’s only Varys brokering a deal between the two houses and Danerys against the Lannisters! With them three and Yara Greyjoy altogether it’s great to see strong women (and the Sand Snakes) coming together to see off the Lannisters. As Danerys prepares to leave Meereen I was half expecting something else to happen to stop Daenerys leaving again. But no she says goodbye to Daario, levaing him and The Second Sons behind to help keep Meereen stable as they elect their new leader (and free for Daenerys to get new alliances through marriage). She also has a great scene with Tyrion as they talk about her leaving for Westeros and then she gives him a badge, declareing him the Hand of the Queen! That was a lovely moment and you could tell Tyrion was so touched. For a second I thought he was going to hug her (which would have been well awkward). The season ends with Daenerys setting sail with her companions and armies with her and we have a great shot of the three dragons flying above. The Lannisters better watch out, Daenerys is on her way to Westeros and it’s about bloody time!

It’s going to be a long wait for next season. How will I cope?

What did you think of the episode, was it a satisfying end to the series? Were you shocked by any of the deaths? Are you surprised Daenerys has actually set sail for Westeros? Let me know in the comments below.

Filed under My Kind Of Tv

Tagged as Game of Thrones

8 responses to “Game of Thrones Season 6 Episode 10: The Winds of Winter”