Nothing good ever happens by going into the woods or living near them. And in this horror there appears to be something horrible lurking in the woods.

In 17th Century New England a puritan family are excommunicated from their plantation due to the father’s radical religious beliefs. Living far beyond civilization on a farm near the woods the family are traumatised when the youngest child, baby Samuel disappears while under the care of eldest daughter Thomasin’s (Anna Taylor-Joy). As the crops begin to fail, suspicions of witchcraft begin to take hold of the family.

The Witch is one of the weirdest films I’ve seen in a while. After it was finished I wasn’t sure what I felt about it. I think I liked it but part of me is still trying to figure out what the hell I just watched. Writer/Director Robert Eggers has crafted a disturbing atmosphere in his début movie. With the family being thrown out from the plantation and left isolated to a malevolent force you are constantly on edge waiting to see what else befalls this family. The film plays into some of our worst fears: that someone is praying on your children and that you may not be able to trust or control what’s going on around you.

The film feels like a strange nightmare that you’ve had after falling asleep reading old fairy tales. From the creepy woods where bad things always happen, a woman in a red hood and of course witches, twisted fairytales have their blueprints all over this. The film may not be to everyones tastes, especially to those expecting to see more of a mainstream horror. This film relies less on jump scares and more on bringing you disturbing images and a forboding score that leaves you unsettled.

The film focuses on a small cast who manage to hold the film together well. The young actors playing the children are engaging and newcomer Taylor-Joy is particularly beguiling as Thomasin. Wheras the parents Ralph Ineson and Katie Dickie are in turn sympathetic and sinister.

I can imagine this being a divisive film, the showing I went to had a few walk outs. Its not a traditional horror movie so anyone looking for that will be disappointed. The filmmaker also did meteculious research into the time period and uses language spoken at the time. While I appreciated the detail that went into making it sound as authentic as possible sometimes I found it difficult to understand what the characters were saying.

Rating 3.5/5 – an unsettling movie that plays on your mind long after 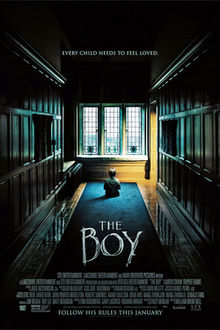 Dolls are creepy! Thats just a fact. So if I was asked to babysit a doll for some weird family I’d run for the hills. But then that wouldn’t make for a good horror movie would it.

Greta (Lauren Cohan) is an American in England who takes a job with an ederly couple (Jim Norton and Diana Hardcastle) as a nanny. However when she meets their “son” Brahms, she finds he is a procaline doll that they treat like a real child after their real son Brahms died in a fire. Needing the money and to escape from her past Greta accepts the job while the couple goes on holiday. When she fails to follow the family’s strict rules for taking care of Brahms, strange things soon start happening in the house and Greta is wondering if the doll Brahms is really alive.

I was a bit dubious about this film before I went to see it, but The Boy was a surprisingly enjoyable movie. Yes it can be silly in places but it was also thrilling at times and kept my attention throughout. I also did not see the twist coming in the last third which is always a good thing.

The performances are not bad for a horror movie. Cohan is a likeable and sympathetic lead despite the character being a fool for accepting the job in the first place. Norton and Hardcastle are both darkly comical and unnerving as the Heelshire family who are the “parents” of Brahms. While Rupert Evans is amicable enough as the potential love interest and tries hard to be a more three dimensional character than just the “exposition” guy.

As for the doll, Brahms is creepier than I found him in the trailer and the film does have a sinister undertone throughout. It’s just a shame the film doesn’t build more on this. A few good jump scares aside there isn’t any stand out frightening moments or scenes that have you screaming in the cinema.

Back in 2013 Gerard Butler’s Olympus Has Fallen went head to head with Channing Tatum’s similar themed -White -House -in -trouble White House Down. Now Butler is back in the sequel London Has Fallen.

After the death of the British Prime Minister, the US President Benjamin Asher (Aaron Eckhart) comes to London to attend his funeral. However when a terrorist attack threatens the lives of the world leaders it’s up to Secret Service Agent Mike Banning (Gerard Butler) to get the President safely out of London.

I must confess I haven’t seen Olympus Has Fallen. But I doubt it was essential in watching this sequel. London Has Fallen won’t text your brain power but it will happily numb it for an hour and a half. So relax and stop wondering why the supposedly bullet proof car only protects Banning and his friends but not the black driver or how Gerard Butler can survive as helicopter crash without even having as little as his seatbelt on. The film would probably hope you forget its clichéd baddies too that some may find offensive as well as hammy.

The film is often funny but mostly unintentionally so whether it’s Gerard Butler’s wondering American accent (which is practically non existent when Banning interacts with a Scottish SAS officer) or the over the top action. Still it kept me entertained throughout.

Many of the actors such as Morgan Freeman, Angela Bassett and Charlotte Riley are a bit wasted while Charlotte Riley makes an impression as an MI6 officer but is also underdeveloped. The film would have you believe that world security is so rubbish apart from Gerard Butler. I was half expecting a revaluation that Banning was some kind of immortal ninja considering the amount if times he escaped certain death.  Sometimes I found Banning really irritating and smug. He was also a bit too gleeful when stabbing terrorists in the eye considering he’s meant to be the hero.

This won’t be winning any awards or be the top of anyone’s action movies but go with a few friends (and maybe a few drinks) and you may find it enjoyable enough.

The Other Side of the Door 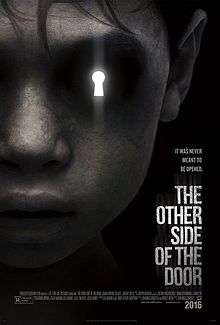 Grief and mystical burial sites do not mix well- just look at what happened in Pet Cemetery. Supernatural horror The Other Side of the Door is the latest attempt to show how bad things can go when you mess with dead.

Maria (Sarah Wayne Callies) and her family have been lost since the death of their son Oliver (Logan Creren). When she learns of remote Hindu temple that will allow her to speak to her son through an ancient door one last time Maria decides to take the chance to say goodbye. However when she disobeys the rule never to open the door she finds that spirits have followed her home and they means to do her family harm.

The movie starts off well with the central family coming across as sympathetic in the grief for their eldest child. Callies expresses grief well and her guilt over her son’s death makes it believable that she would resort to desperate measures to communicate with her son again. However once Maria opens the door allowing spirits to enter into the world the film becomes rather silly. Horror movies require people to act as stupidly as possible but it also makes it hard to care what happens to these characters when they make repeatedly bad mistakes. This makes the film a frustrating experience, especially in the movie’s last scene.

While setting the action in India should be a novel idea the film wastes its location and it’ Indian characters feel like stereotypes or even offensive. Jeremy Sisto is also underused as Maria’s oblivious husband. It says a lot when the most sympathetic and intelligent character is the family’s pet dog.

What perhaps is the most unforgivable mistake the film makes is that it’s just not scary. Bad CGI and an over reliance on jump scares fails to make the action scary.

Rating 2/5 – underwhelming horror that fails to deliver the scares

Rapid Review: Sleeping With Other People 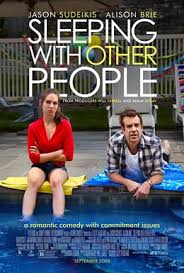 After losing their virginities to each other in College, Lacey (Alison Brie) and Jake (Jason Sudeikis) meet each other again at an addicts meeting. Jake is a sex addict while Lacey is a love addict. They decide to stay friends and not let sex get in the way. But this becomes easier said than done.

Sleeping With Other People is rude and funny. There are several hilarious moments such as  Lacey’s uncomfortable confession to her boyfriend in a public resturant, Jake teaching Lacey how to…er…love herself, and Jake and Lacey’s drug fuelled dancing at a kid’s party. It’s fun seeing Brie as something completely different from her role as uptight Annie in the brilliant Community and she works well with Sudeikis. Adam Scott is also fun as the massive douche that Lacey is obbessed with.

Towards the end the film becomes less subversive and heads more towards traditional rom-com territory. But it’s still a funny and worthwhile movie to see.

MovieRob
CinemaClown
See It or Skip It

Should you watch it or not? Let me help you decide.